We bring solemn craftsmanship to Buddhist paintings and Hyogu in temples, and modernity as interior decoration to today’s houses! By preserving and effectively using traditions, Hashimoto Kogando provides you with a comforting environment.  If you have any questions or concerns about Hyogu, please feel free to contact us.

Karakami paper is paper used for art and was introduced from China.
It started to be made in Japan as well in the Heian period, being used as paper to write poems on.
Because Karakami paper is strong and durable, it then came to be utilized for decorating sliding doors and sliding screens.
Kyoto specifically has been famous as a production area of karakami, and that made in Kyoto is called Kyo-karakami.
Patterns are printed on the paper by scraping it on a wooden board with carved patterns.
We’ve been developing new items so that we can let people feel more familiar with this karakami paper in their modern lives. 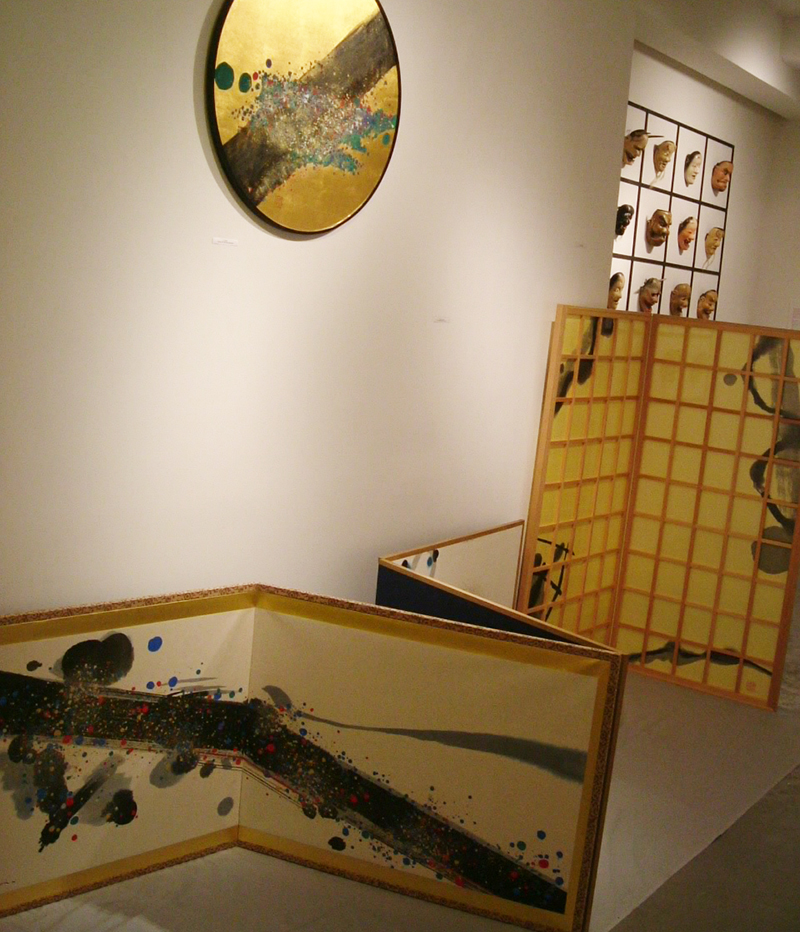 Founder: Iwajiro Hashimoto
Born in Chudoji-machi, Shimogyo-ku in Kyoto City in 1860. After serving a paper wholesale dealer as an apprentice, he became an apprentice to a Hyogu shop. He founded Hashimoto Kogando in 1883. Apparently, he re-covered sliding doors and sliding screens at first, but gradually started to deal with wall scrolls as his main work. He was commissioned with gilding for both Nishi (Western) Hongwanji and Higashi (Eastern) Hongwanji temples. The work of gold paper covering for temple wall paintings also increased.

2nd President: Yasutaro Hashimoto
Born in Ushitora-cho, Shimogyo-ku in Kyoto City in 1886. Apprenticed to the 1st President. While mainly producing wall scrolls, he also traveled to Hokkaido to do gold paper covering. In this period of time, we were active in interactions with painters, such as the buying and selling of paintings.

3rd President: Sotaro Hashimoto
Born in Ushitora-cho, Shimogyo-ku in Kyoto City in 1913. Gained techniques and knowledge of Hyogu from the 2nd President and his wife. Because he was in poor health, he devoted himself to producing wall scrolls in his house. Died of an illness in 1944 at the age of 27.

4th President: Tojiro Hashimoto
Born in Ushitora-cho, Shimogyo-ku in Kyoto City in 1916. After Sotaro died, he entered into the world of Hyogu. Because of WWII, materials and other items from his ancestors were lost. From around 1950, orders for re-covering sliding doors and sliding screens increased, which then became the main work. He also started to receive orders for wall scrolls from art dealers and other clients. He established the technique of gilding based on the memory of the past and also adding some improvements. Although he was commissioned with gilding for the restoration of Nijo Castle, he didn’t get the job because his work was too clean. He taught some painters gilding.

If you have any questions or requests for Hashimoto Kogando Inc., please feel free to contact us.
It may take a while before we reply, so if you are in a hurry, please call us directly.

We speak Japanese, English, and Chinese, so feel free to contact us.