Restoring of a hanging scroll in Boston 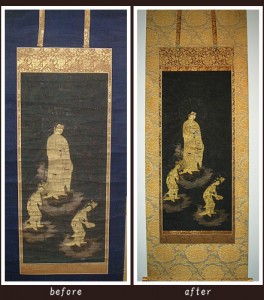 Received an order for restoring a wall scroll from an antique dealer in Boston In starting to work in the US as well, I made this deal through someone who is on familiar terms with us.

I first met the dealer at the site of an antique fair held in NY.
While talking with him, I was surprised to learn that he was very familiar with HYOGU and paintings.
In this conversation, he said he owned something he didn’t know whether he could repair by himself and seemingly didn’t know what to do.
On a later day, I saw the scroll and found that it was a very old one (probably from the late Kamakura period to Muromachi period).
For restoration, we partially used authentic gold brocade, which was actually used for the scroll.
As he seemed to be concerned about the scroll while we were keeping it, we kept letting him know of the work progress.
After having completed it, I carried it to the gallery in Boston and he really liked it.